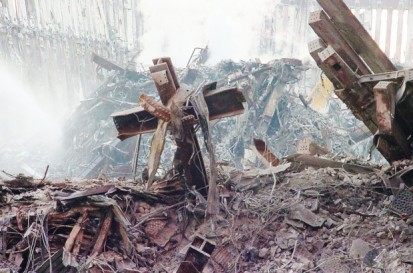 gone in an instant and we all wanted to know that there was something, someone, bigger than all of that, a God we could trust. I remember asking my Mother in Law: “I know you were just a little girl then, but in the days after Pearl Harbor was there a revival— did the churches fill up?”

She had to think about it a little but she said; “Yes, they did, people turned to the church and the Lord.” Looking back now with a better sense of history and a few years removed from 9-11 I can see the big difference between Pearl Harbor and 9-11. Back then people largely kept going to church. The churches stayed full through the ‘40’s and ‘50’s. That’s why we have all these huge Catholic, Methodist, Lutheran, Presbyterian church buildings — what we now call mainline churches— that our grandparents filled up every Sunday.

Those old buildings are now largely empty and today, even after our own Pearl harbor, the vast majority of Americans play golf or watch their kids do sporting events on Sunday mornings. We briefly turned back to God for our protection—and received it— but we have soon forgotten and become arrogant and I see that sovereign hand of protection slowly moving away once again. It’s evidenced in all the Allah-Akbar shootings we have had just in recent months.

I don’t believe in this age of the covenant of grace that God actively punishes us, but when we turn away from him and go our own way we remove ourselves from his protection and allow the enemy of our souls to do as he pleases. I think that’s what happened on 9-11 and I fear it is happening again.

Like all believers I did a lot of praying in the days after the attacks and I sought answers: Lord what has happened and why did this happen? I believe God answered me.

In the uncertain and anxious days after that attack, even as some high profile preachers were proclaiming this to be the Judgement of God, the Spirit told me that this was not judgement, it was a loss of protection. The hand of God’s protection and blessing had been withdrawn, not by his vindictiveness or desire to see us suffer to teach us a lesson, but because we had forgotten from where our help comes, we got prideful and we pushed the Lord away. We were not judged, we rejected the hand of protection and allowed evil a place to strike.

God did not delight in our suffering, in the loss of thousands of lives, the agony of countless families who never got to say goodbye to their loved ones, God did not delight in seeing anyone suffer, I believe God wept for the lost, grieved for the hurting, and ached to bring back his hand of protection once again. And he did, because people flocked to the church, people turned to him and we once again enjoyed the protection. Between his sovereign hand, and the strong if not short lived resolve of a nation to fight to stop those who would destroy us, we were safe once again.

Jesus weeps for us, we who call ourselves by the name of the Lord and those who have turned away. Just as he wept, and still weeps for Jerusalem;

41 Now as He drew near, He saw the city and wept over it, 42 saying, “If you had known, even you, especially in this your day, the things that make for your peace! But now they are hidden from your eyes. 43 For days will come upon you when your enemies will build an embankment around you, surround you and close you in on every side, 44 and level you, and your children within you, to the ground; and they will not leave in you one stone upon another, because you did not know the time of your visitation.” Luke 18

Jesus doesn’t want to withdraw his hand of blessing and protection from us anymore then he did when Jerusalem rejected their King-ultimately allowing the Romans to destroy them. But, as in the days before 9-11, we have again gotten arrogant and forgot from whom our help comes and stopped asking for his protection; that is no one’s fault but our own.  Evil is very real and hell bent on destroying us and is looking for any opening- in our personal lives or our nation.  I can tell you that day pained him and he grieved right along with us in those evil days as his children wept for what was lost.

We have enjoyed his protection and divine help throughout our history and in healing from the terrible September, morning but I fear we have lost that once again, the attacks have resumed and this nation is in danger of collapse both from without and within.  We are now farther from the Lord than we have ever been. Our elected leadership has proclaimed us to be no longer a Christian nation, the highest court in the land has systematically stripped away our freedoms and rights as Christians and the church has spent more time worrying about sound systems and coffee bars than they have about the evil that is running this government and the greater evil that wants to destroy it—and us.

I know most of you reading this looks to God and cries out to him for your deliverance and strength but sadly, as a nation, we have turned our backs on him and I fear what is coming. We, the church, must be diligent to do what we can to be the beacon of hope, to keep trusting and sharing our hope. To weep for this nation and be on our knees. “If you had known, even you, especially in this your day, the things that make for your peace!

if My people who are called by My name will humble themselves, and pray and seek My face, and turn from their wicked ways, then I will hear from heaven, and will forgive their sin and heal their land. 2 Chronicles 7:14

And having disarmed the powers and authorities, he made a public spectacle of them, triumphing over them by the cross. Col 2:15

We were not saved to be victims.