Today I celebrate my 57th birthday, another year, another turn on the wheel of the master potter, and another day to trust and marvel at his work. And best of all, to get to share it with those whom I love—and with you, my unseen but truly appreciated and heart connected brother and sisters. Be blessed, and please don’t be shy about leaving a comment, I would love to hear from you too.

3 Then I went down to the potter’s house, and there he was, making something at the wheel. 4 And the vessel that he made of clay was marred in the hand of the potter; so he made it again into another vessel, as it seemed good to the potter to make.

5 Then the word of the Lord came to me, saying: 6 “O house of Israel, can I not do with you as this potter?” Jeremiah 18

Turns of the wheel

Moving from the Frozen North to the Southwest, leaving home to go far away into Job Corp, getting hooked on partying in any shape or form only to be radically delivered by an encounter with the Holy Spirit, getting married, becoming a dad and a rancher, leaving a lead man position in a welding shop to become a carpenter at 30. Taking college level theology classes at age 40, becoming a kids pastor in a church started in an old school on the wrong side of the tracks in Billings.

Becoming the pastor of a church that I planted at age 50—and that’s just the highlights—there were a lot of low lights along the way also, impurities that needed worked out, things that I think hindered me from skipping  over some of the more challenging turns of the wheel and fulfilling my call to pastor much earlier in life.

But God is good, God is patient and I had to be broken a few times to be remade along the way. I told you one of those stories last week, falling into the pit a work and blowing out two discs in my back; definitely a breaking that enabled God to retool me and reset some of my thinking. The night I realized just how hopelessly addicted I was to marijuana was certainly a breaking point as I cried out to the Lord, to the Potter—’please have mercy on me and set me free!’ He did, I was restored and his hand of blessing restored.

We have to be broken sometimes to be rid of the impurities that ruin us but we don’t have to be resigned to things being broken that are good, like homes, hearts, promises and lives.

When it comes to those things we often have a choice. It’s being broken of the things that cause the good things to end up broke that I’m talking about.  I remember when we first got married I had this almost crippling fear that Donna was going to leave me at some point, that our marriage would inevitably fail because that’s what I saw all around me and especially growing up.

Growing up in a broken home was hell, I’m sorry but it was, and it deeply affected my perception of life and relationships. It planted an unhealthy fear in me that had to be broken.

It started three weeks after our wedding when our house burned down. My greatest fear as I stood there watching everything we owned go up in smoke was that Donna would now leave me because I had nothing, not even a home to live in.

We moved into a trailer house literally across the road that just happened to belong to her Dad and her sister and her family had just happened to have moved out of it two weeks earlier. A month or two later we had one of our first real arguments and in the aftermath I kept seeing this picture in my mind of her packing her things, which wouldn’t have taken long at that point after the fire, and walking out the door.

I remember telling her one day in that first year, I wish we could just jump ahead ten years so that we could say we made it, we’re still married. I had heard a statistic that most marriages don’t make it past five years and my own parents had divorced when I was five. She kind of laughed at me and then realized I was serious, she assured me she wasn’t going anywhere.

During this time I prayed earnestly every day that the Lord would bless our marriage, that we would stay together and never have to suffer the trauma and pain of divorce and I remember very clearly the Lord speaking to me as I was driving home on Blue Creek road and praying as I always did. I still remember where I was on the highway when the Lord told me in no uncertain terms; ‘Your marriage will not fail, it is founded on the rock and nothing will ever come between you.’

“That is my word to you, put that right down there under your feet and stand on it.”

I wept and praised the Lord, something had broken in me at that point, the fear was gone. My marriage was safe in the hands of the Lord, my wife would not leave me, I had made a vow to her and her to me and as long as we were both committed to that vow, to one another, and to the one who gives us the ability to keep those vows, to the only one who can give us that assurance—we would make it.

We serve a God of miracles, whatever you fear, whatever causes you grief, give it up to Jesus; “In this world you will have trouble, but do not fear, I have overcome the world.” 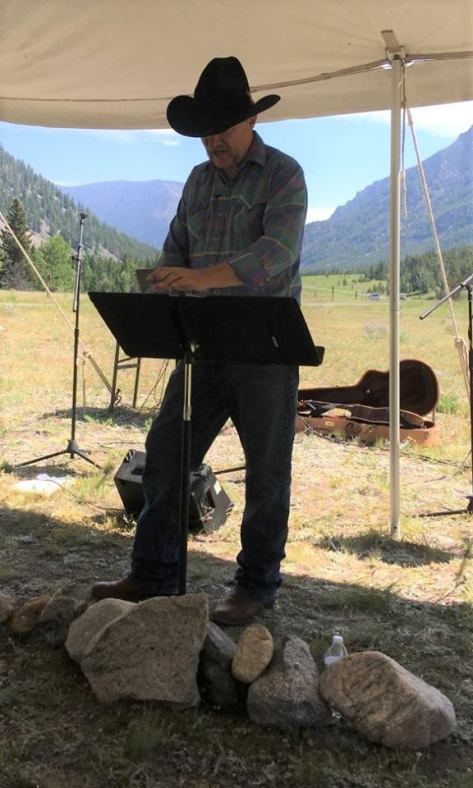 I love you all, have a blessed week!